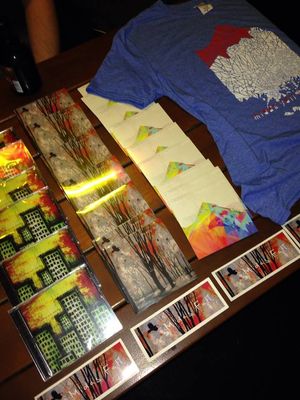 The follow-up release to our second album 'Wilderness' is finally out on Monotreme Records - hurrah! You can download it from the vast majority of digital reteailers, including iTunes, Amazon and the Android Play Store.

The EP is also available as a limited edition CD only from the Monotreme Records webstore or directly from the band at one of our upcoming European shows.

At our shows we will also have a limited run of 'Fluorescent Lights' themed t-shirts as well as CD copies of our debut album 'Eleven. Return and Revert' and sophomore LP 'Wilderness' as well as stickers and badges, so you decorate yourself  like a Midas Fall Christmas tree, lovely.

We look forward to seeing you on the rest of the tour, which so far has been massively enjoyable!