Midas Fall supporting Her Name Is Calla on December mini-tour 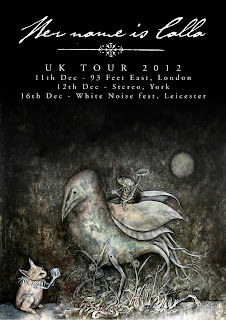 We are very happy to announce that we will be supporting the beautiful Her Name Is Calla on their UK mini-tour in December. Cities we will be visiting are York, London and Leicester, with further support coming from Richard Parker and The Microdance. For tickets and further information please keep up with the event page on Facebook.


This Saturday we will be supporting We Were Promised Jetpacks at the Mad Ferret in Preston with further support coming from Manchester's Rook and the Ravens.
These shows will be our last of 2012 as we take a little time off to prepare for our 2013 European tour and forthcoming second album release.
In other Midas Fall news, we're very sad to say that Simon will no longer be playing with the band due to personal commitments. As such, we're currently hunting for a replacement to join us on our 2013 tour and beyond. Details of the full touring line-up will be announced early next year.
Live dates: